Budworm Or Heliothis Virescens
The deadly insect that consumes cotton

A single larva of H. Virescens can consume more than 15 productive structures during its development.

Known as the “big boll perforator”, this worm causes deadly damage mainly to cotton and tobacco crops, but can also attack other crops.

The damage caused by the budworm has a direct impact on fiber quality, mainly in consistency and color, reducing production and causing serious economic losses to growers.

Together with the cotton boll weevil, it is the most destructive pest on cotton plantations worldwide.

What is the budworm or Heliothis Virescens?

MS: The budworm is from the lepidopteran insect group that attacks a large variety of crops (which is why it is classified as polyphagous) and is considered a pest of great importance on cotton plantations. H. Virescens goes through an egg state (2-5 days), followed by a larva state (14-30 days). It is during this second state that it damages the plants, and goes through 5 or 6 growth stages, ultimately reaching a length of 4-5 cm at maximum development. The pupae (10-18 days) are usually present in the ground when the completely developed larvae crawl down off of the plant. After the pupa state, the adults—also known as moths—emerge. This is the reproductive and dispersion state of the pest, and the adults are usually nocturnal. Moths have a wingspan of 2.5-3.5 cm and stand out from other similar-habit species due to three very characteristic grey-brown oblique lines on their anterior wings. Their second pair of wings has a silver tint.

Females can lay up to 400 eggs at night. Eggs are usually placed individually on leaves or terminal structures of the branch. After the eggs hatch, the recently emerged larvae gnaw the terminal buds of the plant and can cause them to dry-up. During their development, larvae feed on the squares, flowers, and bolls. Feeding on squares contributes to the early loss of productive structures on the cotton plantation. During feeding, the pest drills the structure and consumes its interior, causing the loss of the structure, and therefore, a reduction in yield. In the case of legumes, the pest penetrates the pod and consumes the seed. 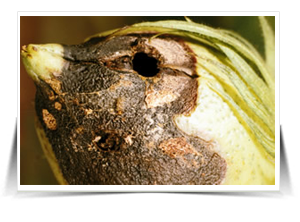 What symptoms are present in infected crops?

MS: On a cotton plantation, damage by H. Virescens occurs when it attacks the flower buds and causes them to open and fall off, which results in the loss of these structures. When it attacks more developed structures such as the bolls, the insect makes a circular entry hole and consumes everything, or almost everything, inside the boll. The larva’s excrement can usually be seen outside the consumed structure.

What biological, physical and environmental factors facilitate the contagiousness and propagation of the pest?

MS: The pest is distributed throughout all cotton-growing regions from the United States to the Caribbean and South America. It attacks during virtually all cycles of the crop throughout the region, although its population tends to be higher in some seasons than others. The insect is adapted to the region’s environmental conditions, especially to those where cotton is grown. Therefore, it can be assumed that it will be present at levels that surpass the economic damage threshold, thus requiring control measures to be taken during all cotton seasons.

What regions or crop conditions are more predisposed to contract this pest?

MS: The species is distributed throughout all of Tropical America, from northern Argentina to Mexico, and in the United States of America. In general, H. Virescens is present in all cotton-growing areas of the region; from the United States, Mexico, Central America, and the Caribbean, to Colombia, Ecuador, and Peru.

What preventive measures can be taken to avoid this pest?

MS: Even though, in general, they are not very effective and are sometimes difficult to implement, there are some preventive measures, such as the timely destruction of ratoon (harvest residues) between one cotton planting season and the next, that can contribute to a healthier crop and fewer pest attacks in general, and specifically by H. Virescens. Additionally, the synchronization of crops in short periods also helps to reduce the intensity of attack by this pest in some areas of the region.

What control mechanisms should be used to control the emergence of the pest and/or eradicate it from the crop?

MS:In many markets, varieties that are genetically modified with Bt are used as they are very efficient at controlling the pest. In those countries that still do not have Bt cotton varieties, the pest has a variety of natural enemies. For this reason, biological control may become an appropriate tool for Integrated Pest Management, including the use of formulations of Bacillus thuringiensis, which is available throughout the entire region. Egg parasitoids such as Trichogramma spp. causes high mortality in H. Virescens. There is also knowledge of the benefic action of predators such as Orius spp. and Geocoris spp., which have been observed attacking the budworm in all the geographic regions where it attacks cotton plantations.

In the case of severe infestations that exceed levels that are considered to cause an economic loss, insecticide control can be implemented in a rational way in order to prevent the development of resistance to these products. Resistance has been a characteristic of H. Virescens and that has complicated its management based on chemically synthesized insecticides.

Some pest control recommendations are:

Mechanical Control:
Hand collection of damaged buds to eliminate larvae and collect parasitoids, especially at the beginning of the attack.
Prune the points of the plants and advanced ratoon to eliminate small larvae.


Chemical Control:
In the first stages of the crop, use stomach-action insecticides.
Applications of Bacillus thuringiensis.

In general what were the losses caused by Heliothis Virescens in Latin America in 2010?

MS:Although there are no precise statistics on losses, if it is taken into account that a single larva of H. Virescens can consume more than 15 structures during its development and cause a total loss, the damage that has traditionally been attributed to the pest is very significant. This pest has historically required several applications per crop cycle, which has made its management one of the most important costs of producing cotton in the region. 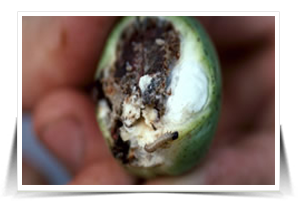