It is considered the most destructive foliar disease and the one that causes the greatest economic impact in banana and plantain crops, with the potential to cause losses of up to 50% of yield.

Without control measures, Black Sigatoka can reduce bunch weight by up to 50% and cause a 100% loss of production due to a reduction in quality.

ts name comes from the Sigatoka Valley in Fiji where it was first identified in 1912. Over the next 40 years, the disease spread to all banana-producing countries. Sigatoka appeared in Central America in 1934.

1. What is Black Sigatoka?

It is a destructive foliar disease that primarily affects plants of the genus Musa: banana and plantain. It is caused by the ascomycete fungus of the genus Mycosphaerella fijiensis Morelet (anamorph Pseudocercospora fijiensis) and represents the principal phytopathological problem for these crops..

Sigatoka is the most important banana disease worldwide. Its name comes from the Sigatoka Valley in Fiji where it was first identified in 1912. Over the next 40 years, the disease spread to all banana-producing countries. Black Sigatoka appeared in Central America in 1934 and in two years had destroyed more than 8,900 hectares of banana in Honduras and Suriname. In 1936, fungicide spraying programs using the Bordeaux Mixture (copper and lime) were developed to control the disease.

La Black Sigatoka is present in all banana-producing countries and is considered to cause a significant economic impact because it reduces yields, affecting plantation productivity, and is expensive to control.

2. What are the symptoms of the affected crops?

The pathogen rapidly destroys leaf tissue, and as a result, photosynthesis is reduced, which affects plant growth and production. In the absence of control measures, the disease can reduce bunch weight by up to 50% and cause a 100% loss of production due to deterioration in the quality of the fruit (length and thickness).

All stages of the disease can be found on a plantation. Initial symptoms are almost imperceptible marks, reaching advanced stages with necrosis or burning of the leaf area, which reduces the photosynthetic capacity of the leaves. 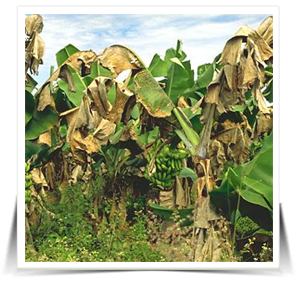 3. What biological, physical and environmental factors facilitate the spread of the disease?

Biotic and abiotic factors are closely related in the epidemiology of M. fijiensis with respect to the appearance of signs and symptoms. High temperatures, relative humidity and rainfall favor the development of the disease, increasing its severity on plantations. Wind currents, especially during periods of storms, contribute to the spread of the disease over long distances.

Other conditions such as high-density planting, inadequate or untimely fertilization, lack of drainage canals, and the delaying of cultural activities like defoliation, surgeries, nutrition and weed management, in addition to weather conditions, make it more difficult to manage the disease.

As a polycyclic disease, the pathogen (M. fijiensis) is reproduced asexually and sexually. Asexual reproduction occurs in young lesions of the disease (marks 2 and 3 and the first stage of the stain). Conidia (Fig. 2) appear in simple conidiophores that emerge through the stomata, mainly by the abaxial surface of the leaf. Conidia are dispersed by the splashing of rain and are associated with the spread of the disease at close range.

The sexual phase, which is most important for the development of the disease, occurs in the mature lesions in structures called perithecia or pseudothecia, inside which are asci containing ascospores (Fig. 2). The ascospores are released into the environment during periods of high humidity and are then dispersed over long distances by air currents.

4. What preventive measures can be taken to avoid this disease?

The high virulence of M. fijiensis requires preventive measures to focus on the appropriate management of cultural activities on the plantation and the continuous monitoring of the disease’s evolution. To do so, early warning plots are used to establish the best fungicide management strategy as part of a yearly application program. The objective is to keep the disease at a level that does not affect productivity.

Planting at altitudes greater than 1,000 meters above sea level, or under conditions of moderate shade (under trees), or together with other plant species (mixed plantings or mixed gardens) helps reduce the severity of the disease.

5. What mechanisms exist to control the appearance of the disease and/or eradicate it from the crop? (Cultural, Mechanical and Chemical Control)

n the case of M. fijiensis, total control and/or eradication does not exist. As it is a polycyclic disease in a perennial crop that is grown in tropical countries in conditions that are appropriate for its development, it will always be present on plantations.

"Management strategies", aimed at keeping levels of infection low, are developed through programs based on the proper use of fungicides and other tools such as crop oil.

Programs are developed based on the FRAC (Fungicide Resistance Action Committee) recommendations that govern the proper use of available molecules, rotating different modes and mechanisms of action in order to minimize the risk of resistance, using a portfolio that includes the use of single-site and multi-site fungicides.

Cultural Control
The following practices are recommended from among those that can create a less favorable environment for the disease: weed control, adequate drainage, balanced nutrition and proper planting density.

Detailed sanitary defoliation (topping and surgery) at weekly intervals will reduce the severity of disease.

More recently, the practice of "controlled defoliation or early leaf pruning" (the elimination of the flowers of the three oldest leaves on each plant) has been introduced at the flowering stage to reduce pathogen inoculum.

Balanced mineral nutrition is also important. Some elements such as silicon, copper, calcium, boron and zinc help to reduce the severity of the disease.

6. What innovations and technologies has the Industry developed to protect crops from this disease?

The Plant Science Industry has discovered new fungicide molecules and developed products that aim to reduce the impact of Black Sigatoka, such as succinate dehydrogenase inhibitors (SDHI).

These developments protect banana plantations by impacting cellular respiration in the fungus’ complex II, thereby inhibiting the growth of the germ tube, the formation of the appressorium, and growth after penetration into the leaf tissue.

Technological innovations have been introduced to banana cultivation in order to increase the precision and quality of fungicide spraying, and to reduce environmental and health risks. Some examples are: the Global Positioning System (GPS) that allows spraying to be carried out without the presence of personnel in the field; the smart flow meter, which automatically controls, with high precision, the volume applied per hectare; the automatic opening and closing mechanism that automatically interrupts the flow on the boundaries or edges of the area to be sprayed, thus reducing drift and product waste; and Geographic Information Systems (GIS), which produce maps that can be used to spray specific areas of the plantation in a more selective and efficient manner.

There are several biotechnology research projects making advances in the identification of varieties that are resistant to Sigatoka. 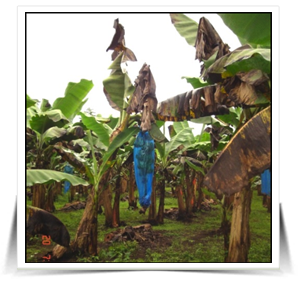 7. In general terms, what were the total losses due to Black Sigatoka during the 2011-2012 period?
It is estimated that losses due to inadequate disease management can reduce productivity by up to 50 percent. However, there are no accurate statistics on the losses caused by Black Sigatoka in banana and plantain producing countries around the world.
Some losses are difficult to quantify because measures are taken to reduce the disease’s impact, such as the early harvest of bunches (precut) when there is high disease pressure (which prevents a total loss but reduces yield in the packing plant (boxes packed per bunch)), and the use of ripening inhibitors to prevent fruit ripening during transport to market.
According to the Association of Banana Exporters of Ecuador (AEBE in Spanish), by June 2012 the volume of banana exports from Ecuador decreased by 13% with respect to the same period in 2011 due to the impact of Black Sigatoka on its crops, which appeared in winter due to the high humidity.
In Costa Rica, the disease has been controlled very effectively over the last three years (2009-2011), and losses for growers have been minimal. However, growers continue to constantly monitor the disease’s evolution and the climate in order to be able to counteract, in a timely manner, any possible acceleration in the development of the disease.